If you’re planning on travelling to New York then here is my guide to what you should know about wheelchair access.

I spent a few days in New York in January 2018 with my Mum. It was winter, cold and it did rain.

There are direct flights from San Francisco to New York. We had a major delay with our plane departing just after lunch instead of in the morning. We flew with United arriving in just under five hours.

We stayed at Hotel Pearl on West 49th Street. It is a brilliant location within walking distance to Times Square, Broadway. There are doorman to open the doors whenever I entered and exited with friendly reception staff. The room was spacious with two seperate beds.

Unfortunately the beds and pillows were really uncomfortable. We didn’t get much sleep. Mum and I ended up swapping beds because I sunk in mine (I don’t even weigh 50kg). This made it difficult for me to turn in bed and get dressed.

I was able to roll under the sink to wash my hands but I couldn’t reach to spit when brushing my teeth and had to spit into a cup. There was a roll in shower with a chair for me to sit on.

We booked Big Bus hop on hop off bus to access the big city. They leave every 20 minutes. All the busses were wheelchair friendly in New York. It was best to know when we wanted to get off so we could tell the driver and make it easier to line up the bus for the ramp.

Wheelchair Taxis aren’t common and are very expensive. Mum had to lift me in and out of the Taxi. We did see some yellow cab wheelchair taxis around but it’s difficult to book these in advance.

To enter many attractions and shops there are revolving doors. There are accompanying doors for wheelchair access. Some doors will have a doorman/security guard to assist, others will have a button to press that allows it to open automatically but some I had to ask Mum to push or pull open.

Ellen’s Stardust Diner, located in Times Square, has waitstaff who sing in between serving customers. It’s a great show including broadway classics. I enjoyed it so much that I went twice! The servings are huge! We were taken to the front of the line and given a table as soon as a suitable table on the ground floor was available. The first time the three of us sat in a line and the next time was just Mum and I sitting across from each other and I was facing the main stage. It can be a tight squeeze to get around other patrons.

I really enjoyed the city views from the HighLine. We checked a map and took a ramp up at the very beginning and went all the way along and took a lift down to street level next to the Whitney. There are some other ramp access and lift access as well as stairs to get on or off along the High Line. The path varies from being even in some places to rough in others. It’s wide enough to have two way traffic. We found an accessible bathroom on the High Line.

TheWhitney is a museum of American art. I really enjoyed the protest exhibition. There are stairs at the entry so lookout for the ramp access. It’s wheelchair accessible inside with large elevators and space to move around the exhibitions. We ate a delicious lunch at the cafe on the ground floor. It was crowded on a Sunday which made access more difficult.

I enjoyed the view from theTop of the rock. To access the building, it is wheelchair friendly but not from all entrances. Find a red carpet, press a wheelchair button and the doors will open automatically, follow a corridor and press a wheelchair button for more doors to open. Take the lift inside and purchase tickets. There are different viewing floors. These are all accessible by elevator. The ground is flat and even. It was quite windy and cold outside. Some of the barriers were high which hindered my view in places. It wasn’t crowded in winter which allowed me to wheel back and around to enjoy the view.

MoMA is the Museum of Modern Art. I went because Mum enjoys art galleries. I did enjoy the photography exhibition. There were elevators inside, even ground and it was spacious to move around. There are also large, seperate wheelchair accessible bathrooms

I loved the Metropolitan gallery. It is huge and impossible to see all exhibitions in one day. The stairs at the entrance feature in Gossip Girl (I’m a huge fan!). To the left of the enrage is an accessible entrance. Inside there are elevators and it’s spacious to move around. There are also cafes inside. Some of the serving stations and counters were high requiring Mum to assist.

We wanted to see the Statue of Liberty. It was a clear day and we could already see her from the Big Bus. We were told by guys on the street to either take a four hour tour and get off the ferry or go on a bus and then take a one hour Queen of Hearts ferry ride around. It was already late afternoon and we didn’t feel that we had four hours to spare so purchased tickets for the one our ferry. On the way to the bus to see if it was accessible we were told to get in a wheelchair accessible taxi because they are hard to find and it will only cost a few dollars. Mum lifted me in and we were on our way. We could see the price rising and it was much more than a few dollars. We were also over an hour early for the ferry and there was nowhere indoors to wait. We spoke to one of the workers and he gave us our Taxi money back. We were going on first. As the ferry arrived and the ramp moved we though it looked too skinny and I worried that I wouldn’t fit. I did and we chugged up with mum pushing and a worker lifting the front. There was a step but we went inside. We were compensated with some snacks. We rode the ferry around and disembarked. We wondered back to a Big Bus stop and ran to our bus. The paths on the way were much smoother and nicer. There are much cheaper and easier options to see the Statue of Liberty. I would suggest walking the Brooklyn bridge on a nice day and seeing her that way or taking the free ferry. 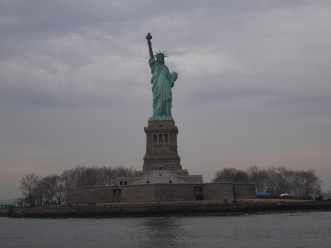 I wanted to see a show when in New York. It is difficult to get accessible tickets at short notice. Plan and book ahead if possible by calling the theatre or showing up in person. Accessible tickets aren’t discounted or put in the lottery. We got accessible tickets to an off-Broadway show (small theatre) called The Marvellous Wonderettes. It was fantastic! My friend Renata and Mum were able to open the double doors and there was an elevator to the theatre. Seats were taken out and I was able to sit in the second row next to Renata and Mum.

I wanted to visit the New York Public Library after watching Goodbye Christopher Robin on the airplane and learning it’s home to the original Winnie the Pooh. I loved it and it’s worth the visit for any Winnie the Pooh fan. The architecture outside is grand and it’s a massive building. There was a ramp and then Mum opened the door to access the inside. Winnie the Pooh was on the ground floor in the children’s section. I didn’t see any other parts of the library.

New York is a big city with wheelchair accessible challenges. Carefully plan what you want to see and do. 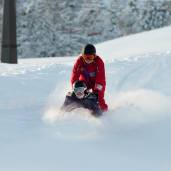 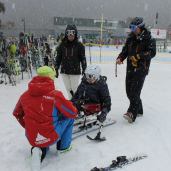 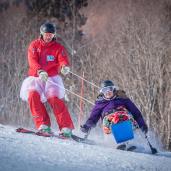 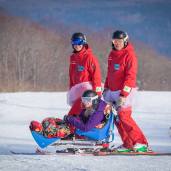 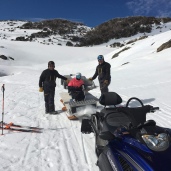 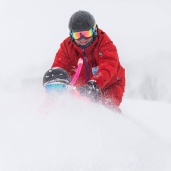 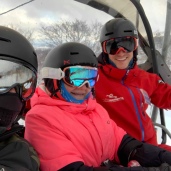 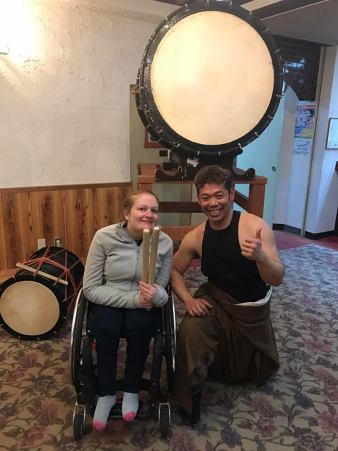